both won Gold at the San Francisco World Spirits Competition, one of the most prestigious awards in the global spirits industry.

The Dubliner’s success in this internationally-recognised competition, which is judged by some of the industry’s most respected experts, demonstrates the outstanding quality of these two whiskies, expertly made by the Dublin Liberties Distillery’s Master Distiller, Darryl McNally, one of the world’s leading authorities on Irish whiskey.

“It’s a source of immense pride to see our Irish whiskies continuing to gain recognition from the industry, not just for me, but for the whole team here in Dublin. With the Dublin Liberties Distillery due to open later this year, this awards success for The Dubliner is very timely,” says McNally.

The success in the San Francisco World Cocktail Competition is the latest in a string of award wins for Dublin Liberties Whiskey Company:

Quintessential Brands plans to open the Dublin Liberties Distillery in the heart of Dublin’s historic distilling district, later this year.  Construction of the state-of-the-art facility, located in a 300-year old Mill Street building, a former mill and tannery, is well underway with the city recently witnessing the arrival of the new steel tanks being airlifted across Dublin (see image below) and lowered into the grounds of the Dublin Liberties Distillery. 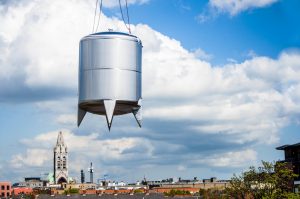 Quintessential Brands is an award-winning international spirits company, dedicated to distilling and crafting the world’s best alcohol brands for consumers and customers globally. Pioneering spirits of the industry, inspired since 1761 by their founder, Thomas Dakin, Quintessential Brands Group delivers a diverse portfolio of award-winning, best-selling spirits with unrivalled heritage and craftsmanship.

Founded in 2011 by Enzo Visone, former CEO of Gruppo Campari, and entrepreneur, Warren Scott, Quintessential Brands Group owns world-class manufacturing facilities across Europe, including G&J Distillers, the world’s oldest continuous gin distillers, in Cheshire, UK; L&L in France, a leading manufacturer of fruit spirits and liqueurs; Irish Cream artisan producers, First Ireland Spirits; and the Dublin Liberties Distillery, which opened in 2019. Renowned for its white spirits expertise at G&J Distillers, Quintessential Brands has won International Spirit Challenge Gin Producer of the Year three times and is fast winning a reputation as one of the most exciting new Irish whiskey producers to emerge on the scene.

We use cookies to ensure that we give you the best experience on our website. If you continue to use this site we will assume that you are happy with it.AcceptDisable CookiesPrivacy policy
Revoke cookies